Painting process finished on this week precisely. These works were scanned and edited to recover its original colour on Photoshop, then uploaded to the InDesign file.

I never thought I will experience difficulties from scanning. However, the dirty screen of A3 scanner’s in Camberwell’s library really made me struggled for a period. I tried the process again and again, spent nearly three hours on finding the standard procedure. I have to choose the photo mode instead of magazine mode to reduce the amount of work of image editing. However, the photo mode would automatically recognise the black area on the image then skipped them. The English landscape part consists of a massive area where contents were kept as simple as possible to created the playfulness and smoothness as the English language than the Spanish language.

The work scanned at the first place would show as below.

If it can be seen from the image, basic half of the page was cut off. Placing a black paper will undoubtedly eliminate the incorrectness; however, the size of the paper may bring the problem to its beginning: I will have to cut and deal with possibly transformation during the scan. Therefore I drew black squares around each corner of the painting to trick the scanner into believing the meaningful content begins at the edge.

Watercolour paper is not likely to be perfectly flat, even if the painter has experience of years’ practices. I wetted each unfelt paintings and placed them under heavy objects. However, the solution was not sufficiently effective. During the scan, it can be quite frustrating for creating areas of unaveraged lighting on the composition. A useful way of solving it is to pile several works that enough to life the cover a bit then put them together in the scanner. Forcefully pressing the scanner cover so that the light can go through the surface smoothly and at the same depth.

Some works were chosen to be photographed instead of scan. It is due to there size, and some of them were composited with other materials while documenting. For example, the one below was filmed with salt dropped on it. 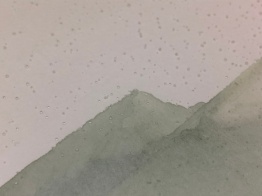 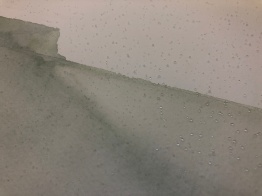 Then all works were sent to the printing room for binding.

A failed experiment on postcard packages. 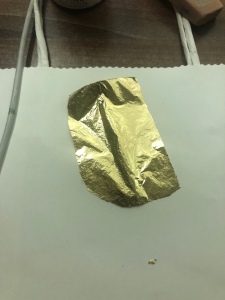 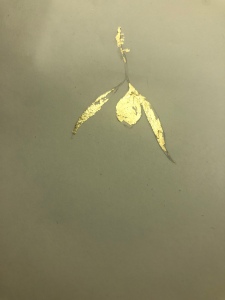 The additional artist book was replaced with a model from the designing stage of the project introduce the idea of the illustration book.

A talk on Tuesday aimed for helping us to develop the symposium was helpful. I have listed some concluded points from the seminar in future reference. Meanwhile, I began to reorganise my statement for fitting in the structure better.

The symposium should reflect what is actually being experimenting and interested in and out of the studio. Everything during the project would require a context. Relevant information regarding the project should be documented. Including who else is working on the similar ideas and materials, who has written about this idea, how do these ideas helped development the question launched before the unit; what has been discovered during the work, what processes involved and how it was formed.

To put it more elegantly, the symposium should be talked about:

I was suggested to divide my presentation into 5 parts with an equal amount of word to maintain the whole structure balanced and clear.

This week’s lecture regarding landscape painting was like specifically designed for me. It greatly expanded the timeline of my understanding of the late Hudson River School and pre-war continental painter’s work. A book by Paul Gilroy called Brokeness, Division and Moral Topography of the Post Colonial World was highlighted for those who interested in the related topics.

Although I have kept not getting involved in political arguments because I consider it is boring. At the larger scale, politics has always been nakedly pursuit of national interest. This is non-arguable. However, recent years politicians started to give up their moral standards and demonstrated by the ugliest behaviours. It is also the reason why I considered diplomacy and politics has become below the average intellectual standard after the death of Richelieu.

On the other hand, mass media basically eliminated the requirement of expressing political ideas. Currently, the more significant environment is dominated by wealth-controlled public media that has lost its reputation and honesty. They are being weaponised by ideologies by each side. As a Chinese, I must say I am offended when seeing western media intentionally guided the direction of discussions to lies. For example, climate change and greenhouse gas problems. They will never tell the truth that China is the world’s most prominent tree planter. On the opposite side, the excellent firewall prevented those whom lack of basic training of logic and independent thinking from access the outside world and establish their own voices, while doing the same stuff as western media but in a fundamental way. I agree with Freud’s opinion that the Great War is just a bunch of youths driven by their sexual urges and bursting them on dominating other individuals by violence. I consider those who are unable to think independently as well as those who try to gain personal benefit from expressing political ideas irresponsibly doing but the same thing. None of the smart protestors shouldn’t be aware that protest and political movement ought to find out a better solution for a massive social problem. Stimulating the opposition of different people has been the topic of recent political movements, it just exhausted me when I looked into it. Being zealotic about the discussion whether Capitalism is better than Communism (As a matter of fact, I doubt if most of these expressers know the definitions of these two ideologies) is much more basic, stupid and juvenile than when the iron curtain fell.

That is also why I intended not to doing political works. I cannot tolerate that I set my standard to a surprisingly low level.

Nevertheless, some exciting ideas discussing the meaning of landscapes to different painters from different eras were introduced during the lecture. I had found some really great inspiration when it came to German landscape painters. As a former barbarian who defeats the Roman empire and rise from forests, I am surprised their proud of this origin still raged out “from Lorenzetti to Anselm Kiefer”. Also, an idea that could be used for criticising artists nowadays’ hopelessly effort for trying to make their works “political” was introduced:

“Landscape in politics, not only be seen pictures of view but signs holds meanings in political, economic and cultural.”

The lecturer pointed out three highest moments of European landscape paints, and they were 14th Century Italy, 16th Century Dutch and 19th Century England. This statement eased me a lot for letting me know I didn’t look in the wrong direction.

The lecturer stated that western landscape paintings were internally connected with imperialism. I have to disagree part of it. Western society chose to expand under the discipline of imperialism and the spirit of pirates to complete the collecting of social wealth. Their former social structure may not decide every painter’s individual ideas. I do consider movements like Hudson River School, the Grand Tour and Romanticism expressed the beauty of human capability. About how the human race is capable of surviving in the magnificent beauty of nature and establishing a society in tight connection with it. Sometimes painters even remind us to remain humble and careful when facing the overwhelmingness of the natural world. A considerable amount of artists were more eager to urge human life with nature and maintain its most beautiful form instead of expressing how should we conquer them.

The boundary between a people’s ground of the end of suffering can be quite unclear with the war song of conquering others. I indeed believe “wider still and wider, shall thy bounds be set” is kind of encouragement of expanding. Still, it can also be explained as the end of the nation’s suffering of being invaded and bullied by other powers. (Although Sun Never Sets had become the most devastated invader in human history)

A work of Casper David Friedrich, The Chasseur in the Forest 1814 was mentioned as one symbolic reflection of the European history of war. The artist recorded a landscape enclosed by forest with a lone figure placed in the only open space of the composition. “The fate of this guy is going to die cause he’s the symbol of this tragic war.”

The comparison between Friedrich’s Chasseur and Albert Bierstadt is highly ironic. Both of them were based on the artist’s experience and observation. However, the latter was filled with hope and optimism. The moving process of landscapes of the great west granted his work a representative style of Hudson River School. Comparing to his colleagues, Bierstadt explored further on the path by which landscapes were rendered dreamy and to some extent, mythological. 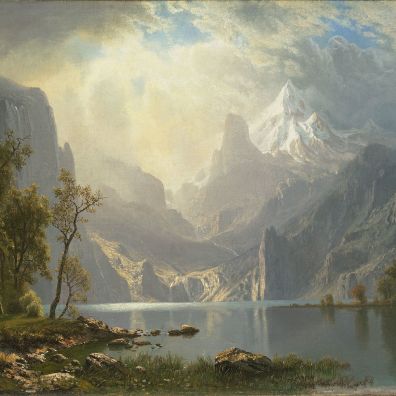 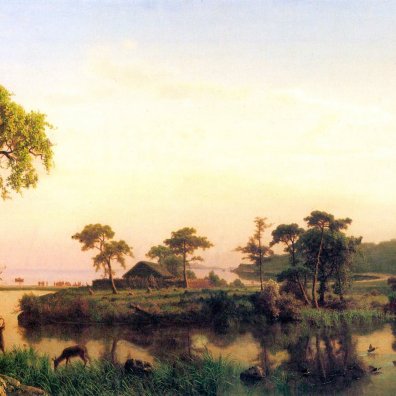 Gosnold on Cuttyhunk, 1602 by Bierstadt.jpg 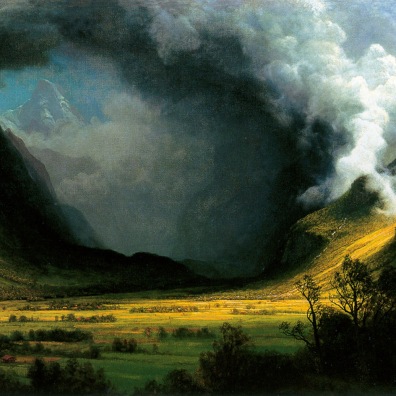 Tomas Cole’s reputable pupil Frederic Church, on the other hand, was the subject that compared on the last paragraph. The painter developed Cole’s master of open space and developed with his elegant control of light’s floatation and gentle rendering from the precise utilisation of dark colours. Two branches of Hudson River School can be clearly observed here: one tends to produce landscapes relatively more realistic like illustrations on encyclopaedia; the other was keen on the cinematic atmosphere and fantasies of light. 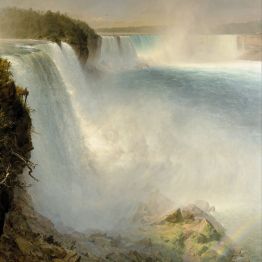 The tutorial with the head of the drawing department suggested sending a request to the library of Natural History Museum of viewing first-hand copy of Audubon and Maria Sibylla Merian’s illustration. The request has been sent, but I have only read about these two artists briefly for the over-crowded timetable of this week. 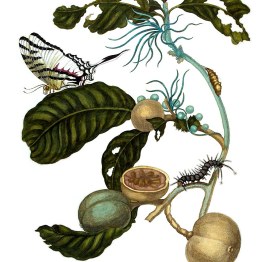