In the spirit of learning, I initiated journalising on the day I arrived in London. Please be advised journal labelled as “week one” should be the first one when the semester officially starts.

Before settling down the core idea and the theoretical direction, I guessed there would be a great chance to choose the theme beforehand without finding it “unusable” whenever the first project brief comes out.

Immediately, I explored the surrounding area, managed registrations (I would like to complain about the efficiency of Metropolitan Police here); I went to several art shops even sneaked in Camberwell campus before obtaining the student ID. In the morning of the second day of my arrival, I jumped on the train and headed back to Brighton.

Studying art, producing works in university is about pushing one’s boundary, is about advancing until there is no space. I have to jump out of my comfort zone. Instead of what I called “general practices”, and paintings that relatively a bit more elegant than “general”, I should be focusing on the problem that “what I can actually bring to the field of art”. This question was pointed out in a seminar weeks after. I have been regretting not to start recording the digital version of the reflective journal earlier the moment I finished that seminar.

I saw an illustration and found it rather inspiring. It was a vast circle. Its centre represents where everyone is; all educations before college was just a small circle around the centre point, thousands of miles away from the boundary of the circle. Bachelor degree is when you choose the direction you would like to pursue towards the outline of the small circle. Master degree is when you push with your life, advance until the boundary of the knowledge of humankind (Here I condemn the one who pressed years of master degree’s study into one). The doctorate is a small lump on the boundary of the humankind, but the influence is barely observable from the big picture.

Nevertheless, the boundary has been expanded essentially. I desire to widen the territory of human’s knowledge. I know it is an adventure with endless errands that can barely be finished. However, my logic circuit jumped out and said, “so you better started now”.

Guided by this idea, I was motivative before the semester.

I went to Sevensisters Country Park. I believe it is one of the most symbolic landscapes in the South Downs, especially for Brighton and Seaford.

I climbed on the cliff and sketches were produced.

Not much I have worked out, it was only week 1. And I think to produce a massive amount of work at once can quickly form an inertial thinking pattern. Therefore a method of sketching was adopted. It consists of three parts.

First of all, observation. Observing the object and its surrounding. Counting the number of objects in the composition, describing their spacial relationship within the perspective. Observation phase stops when a briefed acknowledgement of what I am going to paint formed.

Secondly, memorising. Repeatedly examining the objects and the paper, planning the size of the sketch. Imagining how they are going to be painted with materials I have got. Trying to produce the entire image in my mind. Physical work won’t start until I obtain a comprehensive memory of the landscape.

Thirdly, draw, sketch, paint, use whatever I have got to reproduce the scene onto paper. But considering the sketch as support for enhancing the memory, for I choose to work based on memory and notes instead of painting photographs.

For the first week, I believe settling down which object would be my major interest, which tone may suits them would be a sufficient effort. 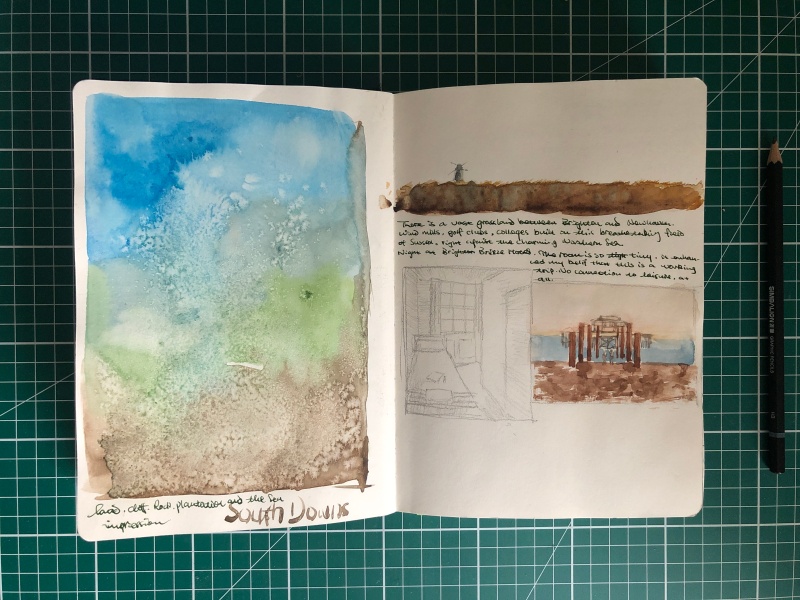